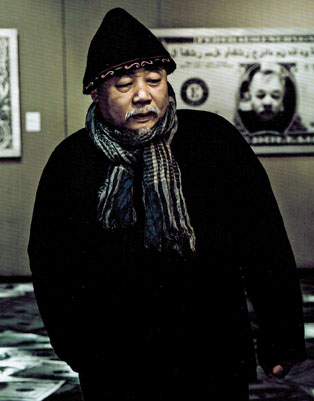 Recently I heard that Song Yongping would be holding a solo exhibition of his woodcut work. This news was in a sense both expected and unexpected. The holding of such an exhibition seemed inevitable to me, partly because woodcuts were Song’s major at university. Indeed, for someone who graduated with a degree in woodcutting from the faculty of painting at the Tianjin Academy of Fine Arts, this event would appear to be rather overdue, coming over three decades since Song graduated (1983).

The announcement was unexpected insofar as Song’s work had been rarely seen since he graduated and returned to his hometown in Shanxi. This was a shame, given that while he was a student he produced some outstanding pieces. The woodcuts that often appeared later on in magazines were highly avant-garde. It was only many years later that I learned Song had set up a modern art group in the 1980s in Shanxi and had organized many modern art exhibitions, including the Seven Artists Modern Art Exhibition and Modern Ceramics exhibition, both in 1985. The following year’s 1986.11.4.13:00 – 15:00, Experiences on a Certain Day is one of his well-known works. Song later launched the Village Planning 1993 art event.

Of particular note is his series of photographs, My Parents which was an important commemorative work.

At the close of the 1990s, just as Song’s career was taking off, both his parents were taken ill. Song was forced to abandon his work and take care of them. It was a time of testing for him, as the physical and mental strain dealt him a double blow. Song was faced with the choice between giving up his career and letting his parents’ situation swallow him up, or fighting back against the cruel hand dealt him by fate. By a stroke of chance, he took up his camera and began a long and painful journey with his parents.

Song recounts how it took him about a decade to recover from the trauma of his parents’ illness and decease. It was only in 2013 that his powerful new piece Potential Violence and the following year’s MONEY! were exhibited, amazing visitors with their presence. These works showed us that the man was back in the saddle after such a long time.

I can see a clear logical progression from 2013’s Potential Violence and the woodcuts at this exhibition. These woodcuts are also a window onto his ideas. In 2013, Song composed the following poem:

The gods are ousted,

If a bank-note somewhere appears,

It is the embodiment of

Song took the image of the dollar bill and transformed it to make a statement about our relationship with money. For example, he (re-)arranged the one-dollar THE UNITED STATES OF AMERICA to ask whether money is the god of the modern world – or rather, what it is that has made modern life so materialistic; what is everlasting love; the death of God; the coexistence of man and money; and whether money is one big illusion. Song put the faces of his friends and family, as well as those of staff from his studio, Marx and Obama on the dollar bills in his exhibition.

Song even employed the original images from the dollar bills to emphasize the origins of the print form, which was as a tool for the transmission of culture or a step towards further printing technology itself. The form can be traced to the emergence of movable type printing in China. Most people may not pay as much attention to the intricate design of a dollar bill as to its value or their bank balance. The beauty of these ‘prints’, the product of so much hard work, has long been overlooked, in the same way that our busy bodies and minds have forgotten how to enjoy the moment in a world where we are constantly striving after more material goods. Of course, Song’s woodcuts address issues far from these; at the same time, he invites us to consider: whose work, exactly, is this? How can a US dollar bill become Song’s work? Where did the inspiration for these pieces come from? It is these very questions that validate the existence of Song’s work.